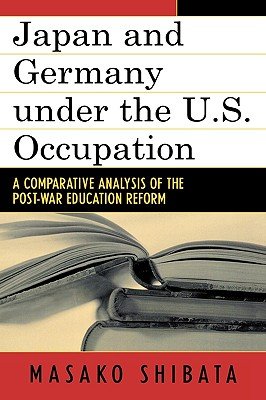 Japan and Germany under the U.S. Occupation explores the reconstruction of education in both countries after World War II. In Japan large-scale reforms were undertaken swiftly after the nation's surrender, whereas in the U.S. Zone of Germany most of the traditional aspects of education were maintained. Masako Shibata argues that differences in the role of the university and in the pattern of elite formation, traceable back to the beginnings of Meiji Japan and the Kaiserreich created the conditions for the diverging approaches of the Japanese and German leaders to the adoption of foreign educational patterns during the Occupation.

Japan and Germany Under the U.S. Occupation

Authors: Masako Shibata
Categories: Education
Japan and Germany under the U.S. Occupation explores the reconstruction of education in both countries after World War II. In Japan large-scale reforms were und

Laying Down the Law

Legacies of the U.S. Occupation of Japan

Authors: Duccio Basosi
Categories: History
Six decades after the end of the occupation of mainland Japan, this volume approaches the theme of the occupation’s legacies. Rather than just being a matter

Observations on Occupation and Military Governance

Authors: Naval War Naval War College
Categories:
Prior to the current Global War on Terror (GWOT), the United States military had not participated in occupation and military governance mission on as a massive

The Axis in Defeat

Authors: 竹前栄治
Categories: Japan
Japan's success in charting a new course in the years following World War II stems from the reforming impetus of GHQ/SCAP, Headquarters of the American-led alli

Authors: Susan L. Carruthers
Categories: History
Waged for a just cause, World War II was America’s good war. Yet for millions of GIs, the war did not end with the enemy’s surrender. From letters, diaries,