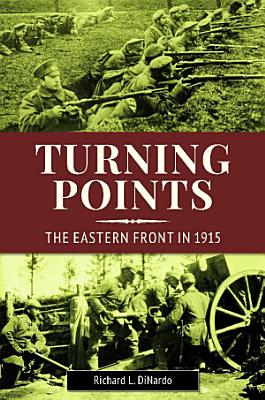 This book provides a comprehensive and illuminating study of some of the most crucial campaigns on the Eastern Front during what was perhaps the most momentous year of World War I in that battleground. Turning Points: The Eastern Front in 1915 offers a well-researched and fascinating study of war in a distinct theater of operations and shows how it was impacted by diplomacy, coalition warfare, command, technology, and the environment in which it is conducted. In contrast to those on the Western Front, lines in the east in 1915 moved hundreds of miles. Although the work focuses more on the Central Powers, significant attention is also given to the Russians. The book follows the course of events on the Eastern Front during the critical year of 1915, proceeding chronologically from January 1915 to the end of active operations in October, with a brief mention of some action in December. In addition to the better-known campaigns in the Carpathians and Gorlice-Tarnów, the work covers lesser-known operations including the Second Battle of the Masurian Lakes, the Austro-Hungarian "Black-Yellow" offensive into eastern Galicia, and the German move into Lithuania. Naval action on the Baltic Sea is also covered. Offers a detailed account of a significant and often overlooked theater of World War I Relies on original documentary research conducted by the author in archives in Freiburg and Munich, Germany, and in Vienna, Austria Analyzes the key campaigns and battles on the Eastern Front in 1915 Builds on the author's 2010 Praeger book Breakthrough: The Gorlice-Tarnów Campaign, 1915

Turning Points: The Eastern Front in 1915

Authors: Richard L. DiNardo
Categories: History
This book provides a comprehensive and illuminating study of some of the most crucial campaigns on the Eastern Front during what was perhaps the most momentous

Counterterrorism Between the Wars

Authors: Tobias A. Jopp
Categories: History
The First World War was a watershed in the evolution of warfare, politics, economics, and the social sphere. One persistent topic in the historiography of the w

Authors: Timothy Dowling
Categories: History
In the summer of 1915, the Central Powers launched an offensive on the Eastern Front that they hoped would decide the war. It did not, of course. In June 1916,

European Culture in the Great War

The Oxford Illustrated History of the First World War

Authors: Hew Strachan
Categories: History
The First World War, now a century ago, still shapes the world in which we live, and its legacy lives on, in poetry, in prose, in collective memory and politica

The German Poets of the First World War

Authors: Patrick Bridgwater
Categories: Poetry
Originally published in 1985, this book provides a full survey of the best and most significant work of German writers to the First World War. Including (in bot

Authors: Ibrahim Mirsal
Categories: Nature
This graduate-level text and reference work is unique among the soil literature. It deals with the interdisciplinary fields of soil pollution and remediation. I

The Making of the First World War

Authors: Ian F. W. Beckett
Categories: History
Nearly a century has passed since the assassination of Austria-Hungary's Archduke Ferdinand, yet the repercussions of the devastating global conflict that follo