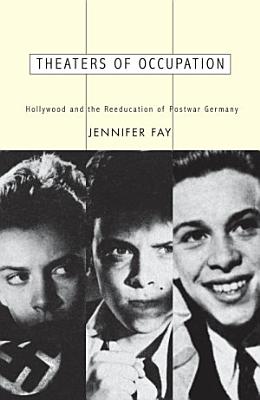 In the aftermath of total war and unconditional surrender, Germans found themselves receiving instruction from their American occupiers. It was not a conventional education. In their effort to transform German national identity and convert a Nazi past into a democratic future, the Americans deployed what they perceived as the most powerful and convincing weapon-movies. In a rigorous analysis of the American occupation of postwar Germany and the military’s use of “soft power,” Jennifer Fay considers how Hollywood films, including Ninotchka, Gaslight, and Stagecoach, influenced German culture and cinema. In this cinematic pedagogy, dark fantasies of American democracy and its history were unwittingly played out on-screen. Theaters of Occupation reveals how Germans responded to these education efforts and offers new insights about American exceptionalism and virtual democracy at the dawn of the cold war. Fay’s innovative approach examines the culture of occupation not only as a phase in U.S.–German relations but as a distinct space with its own discrete cultural practices. As the American occupation of Germany has become a paradigm for more recent military operations, Fay argues that we must question its efficacy as a mechanism of cultural and political change. Jennifer Fay is associate professor and codirector of film studies in the Department of English at Michigan State University.

Authors: Jennifer Fay
Categories: Social Science
In the aftermath of total war and unconditional surrender, Germans found themselves receiving instruction from their American occupiers. It was not a convention

Art and Gentrification in the Changing Neoliberal Landscape

Culture and Customs of the Palestinians

Bulletin of the United States Bureau of Labor Statistics