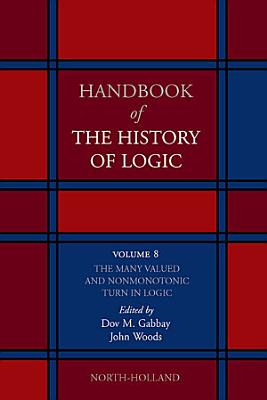 The present volume of the Handbook of the History of Logic brings together two of the most important developments in 20th century non-classical logic. These are many-valuedness and non-monotonicity. On the one approach, in deference to vagueness, temporal or quantum indeterminacy or reference-failure, sentences that are classically non-bivalent are allowed as inputs and outputs to consequence relations. Many-valued, dialetheic, fuzzy and quantum logics are, among other things, principled attempts to regulate the flow-through of sentences that are neither true nor false. On the second, or non-monotonic, approach, constraints are placed on inputs (and sometimes on outputs) of a classical consequence relation, with a view to producing a notion of consequence that serves in a more realistic way the requirements of real-life inference. Many-valued logics produce an interesting problem. Non-bivalent inputs produce classically valid consequence statements, for any choice of outputs. A major task of many-valued logics of all stripes is to fashion an appropriately non-classical relation of consequence. The chief preoccupation of non-monotonic (and default) logicians is how to constrain inputs and outputs of the consequence relation. In what is called “left non-monotonicity , it is forbidden to add new sentences to the inputs of true consequence-statements. The restriction takes notice of the fact that new information will sometimes override an antecedently (and reasonably) derived consequence. In what is called “right non-monotonicity , limitations are imposed on outputs of the consequence relation. Most notably, perhaps, is the requirement that the rule of or-introduction not be given free sway on outputs. Also prominent is the effort of paraconsistent logicians, both preservationist and dialetheic, to limit the outputs of inconsistent inputs, which in classical contexts are wholly unconstrained. In some instances, our two themes coincide. Dialetheic logics are a case in point. Dialetheic logics allow certain selected sentences to have, as a third truth value, the classical values of truth and falsity together. So such logics also admit classically inconsistent inputs. A central task is to construct a right non-monotonic consequence relation that allows for these many-valued, and inconsistent, inputs. The Many Valued and Non-Monotonic Turn in Logic is an indispensable research tool for anyone interested in the development of logic, including researchers, graduate and senior undergraduate students in logic, history of logic, mathematics, history of mathematics, computer science, AI, linguistics, cognitive science, argumentation theory, and the history of ideas. Detailed and comprehensive chapters covering the entire range of modal logic. Contains the latest scholarly discoveries and interprative insights that answers many questions in the field of logic.

The Many Valued and Nonmonotonic Turn in Logic

Authors: Dov M. Gabbay
Categories: Mathematics
The present volume of the Handbook of the History of Logic brings together two of the most important developments in 20th century non-classical logic. These are

Handbook of the History of Logic: The many valued and nonmonotonic turn in logic

Authors: Wei Li
Categories: Big data
This second volume of the book series shows R-calculus is a combination of one monotonic tableau proof system and one non-monotonic one. The R-calculus is a Gen

Authors: Gary F Bell
Categories: Law
This book stems from a symposium held at the Faculty of Law of the National University of Singapore in honour of the pioneer in the field of legal pluralism, Pr

Authors: Wei Li
Categories: Mathematics
This third volume of the book series shows R-calculus is a Gentzen-typed deduction system which is non-monotonic, and is a concrete belief revision operator whi

Advances in Fuzzy Logic and Technology 2017

Authors: Alex Citkin
Categories: Young Adult Nonfiction
The publication of Rasiowa and Sikorski's The Mathematics of Metamathematics (1970), Rasiowa's An Algebraic Approach to Non-Classical Logics (1974), and Wójcic

Authors: Herbert Toth
Categories: Mathematics
The book is intended as an invitation to the topic of relations on a rather general basis. It fills the gap between the basic knowledge offered in countless int

Proposal for the Formalization of Dialectical Logic

Authors: José Luis Usó-Doménech
Categories:
Classical logic is typically concerned with abstract analysis. The problem for a synthetic logic is to transcend and unify available data to reconstruct the obj