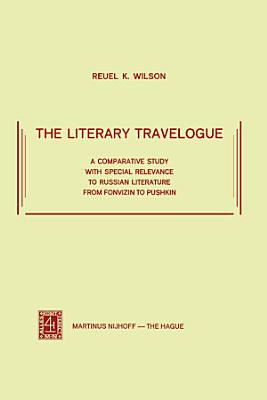 The aim of this study is to trace the development of the literary travel memoir in Russia during the last decades of the eighteenth century and the first decades of the nineteenth. Having indicated the prove nances of this genre in Western Europe, I shall evaluate its role in Russian literary history. Because this study is not intended to be an historical survey of all significant travel works that appeared in Russia, I shall pass over such early pioneer travelers as the Abbot Daniil who visited Palestine at the beginning of the twelfth century and recorded for his countrymen detailed descriptions of the Holy places, or the merchant, Afanasij Nikitin, whose travel notes concerning a trip to India are preserved in a fifteenth century chronicle. The travel genre, which had become enormously popular in eight eenth century Western Europe,l was cleverly exploited by Fonvizin, Radishchev, and Karamzin to expound to the Russian reading public certain important notions on literary theory, on society (foreign and domestic), on themselves, and on nature. The travel genre - then as now a flexible instrument for transmitting, by means of diary-style narrative, information about distant, often exotic people and place- had been adapted by Sterne and others to themes having little relation to a conventional journey. The Russians were quick to grasp the genre's literary as well as its polemical possibilities, and influenced by Western models, they too used it to convey theoretical assertions on a variety of SUbjects.