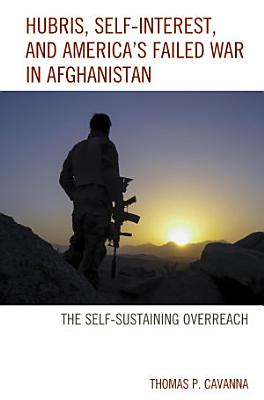 This book describes the conduct of the US-led post-9/11 war in Afghanistan. Adopting a long-term perspective, it argues that even though Washington initially had an opportunity to achieve its security goals and give Afghanistan a chance to enter a new era, it compromised any possibility of success from the very moment it let bin Laden escape to Pakistan in December 2001, and found itself locked in a strategic overreach. Given the bureaucratic and rhetorical momentum triggered by the war on terror in America, the Bush Administration was bound to deploy more resources in Afghanistan sooner or later (despite its focus on Iraq). The need to satisfy unfulfilled counter-terrorism objectives made the US dependent on Afghanistan’s warlords, which compromised the country’s stability and tarnished its new political system. The extension of the US military presence made Washington lose its leverage on the Pakistan army leaders, who, aware of America’s logistical dependency on Islamabad, supported the Afghan insurgents – their historical proxies - more and more openly. The extension of the war also contributed to radicalize segments of the Afghan and Pakistani populations, destabilizing the area further. In the meantime, the need to justify the extension of its military presence influenced the US-led coalition into proclaiming its determination to democratize and reconstruct Afghanistan. While highly opportunistic, the emergence of these policies proved both self-defeating and unsustainable due to an inescapable collision between the US-led coalition’s inherent self-interest, hubris, limited knowledge, limited attention span and limited resources, and, on the other hand, Afghanistan’s inherent complexity. As the critical contradictions at the very heart of the campaign increased with the extension of the latter’s duration, scale, and cost, America’s leaders, entrapped in path-dependence, lost their strategic flexibility. Despite debates on troops/resource allocation and more sophisticated doctrines, they repeated the same structural mistakes over and over again. The strategic overreach became self-sustaining, until its costs became intolerable, leading to a drawdown which has more to do with a pervasive sense of failure than with the accomplishment of any noble purpose or strategic breakthrough.

Authors: Thomas P. Cavanna
Categories: Political Science
This book describes the conduct of the US-led post-9/11 war in Afghanistan. Adopting a long-term perspective, it argues that even though Washington initially ha

Authors: Nivi Manchanda
Categories: History
Over time and across different genres, Afghanistan has been presented to the world as potential ally, dangerous enemy, gendered space, and mysterious locale. Th

Authors:
Categories:
Competition Science Vision (monthly magazine) is published by Pratiyogita Darpan Group in India and is one of the best Science monthly magazines available for m

Drones and Targeted Killing in the Middle East and Africa

Authors: Christine Sixta Rinehart
Categories: Political Science
The use of drone warfare has become a controversial foreign policy weapon to keep the United States safe from further terrorist attacks. This book is an assessm

Authors: Jack Fairweather
Categories: History
A timely lesson in the perils of nation-building and a sobering reminder of the limits of military power from the Costa Award winning author of The Volunteer. I

Authors: Jon Armajani
Categories: Religion
Modern Islamist Movements provides a clear and accessible examination of the history, beliefs and rationale of Islamist Groups and their grievances with the Wes

Where in the World is Osama bin Laden?

Authors: Morgan Spurlock
Categories: Political Science
With a baby on the way and a need to make the world safe for infant-kind, an unassuming film-maker from West Virginia employs his complete lack of experience, k