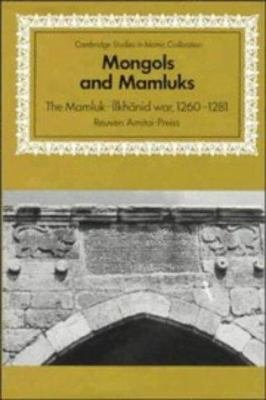 For some sixty years, commencing in 1260, the Mamluk state in Egypt and Syria was at war with the Ilkhanid Mongols based in Persia. This is the first comprehensive study of the political and military aspects of the early years of the war, the twenty-one-year period commencing with the battle of Ayn Jalut in Palestine in 1260 and ending in 1281 at the battle of Homs in northern Syria. Between these major confrontations, which resulted from Mongol invasions into Syria, the Mamluk-Ilkhanid struggle was continued in the manner of a 'cold war' with both sides involved in border skirmishes, diplomatic maneuvers, psychological warfare, ideological posturing, espionage and other forms of subterfuge. Here, as in the decisive battles, the Mamluks usually maintained the upper hand, establishing themselves as the major Muslim power at the time. Using primarily contemporary Arabic and Persian sources, Reuven Amitai-Preiss sheds new light on the confrontation, examining the war within the context of Ilkhanid/Mamluk relations with the Byzantine Empire, the Latin West and the crusading states, as well as with other Mongol states.

Authors: Reuven Amitai-Preiss
Categories: History
For some sixty years, commencing in 1260, the Mamluk state in Egypt and Syria was at war with the Ilkhanid Mongols based in Persia. This is the first comprehens

Authors: Reuven Amitai-Preiss
Categories: History
For sixty years, from 1260 to 1323, the Mamluk state in Egypt and Syria was at war with the Ilkhanid Mongols based in Persia. This is the first comprehensive st

Storm from the East

Authors: Robert Marshall
Categories: History
Traces the history of the Mongol Empire under Genghis Khan and his descendants, describes their military successes, and discusses the Mongol influence on Europe

Authors: Timothy May
Categories: History
Covering the rise and fall of the Mongol Empire, this essential reference presents the figures, places, and events that led this once-beleaguered region to rise

The Encyclopedia of War, 5 Volume Set

Authors: Gordon Martel
Categories: History
This ground-breaking 5-volume reference is a comprehensive print and electronic resource covering the history of warfare from ancient times to the present day,

The Mongol Conquests in World History

Authors: Timothy May
Categories: History
The Mongol Empire can be seen as marking the beginning of the modern age, and of globalization as well. While communications between the extremes of Eurasia exi

Warfare in the Age of Crusades

Authors: Brian Todd Carey
Categories: History
Warfare in the Age of Crusades: The Latin East explores in fascinating detail the key campaigns, battles and sieges that shaped the crusading period of the Midd

Authors: Michael Gervers
Categories: History
This collection provides important insights into the relationships among diverse groups in the period from the eleventh to the seventeenth centuries.

Ferdowsi, the Mongols and the History of Iran

Authors: Robert Hillenbrand
Categories: History
I.B.Tauris in association with the Iran Heritage Foundation Iran's rich cultural heritage has been shaped over many centuries by its rich and eventful history.

Authors: Carl F. Petry
Categories: History
An engaging and accessible survey of the Mamluk Sultanate which positions the realm within the development of comparative political systems from a global perspe