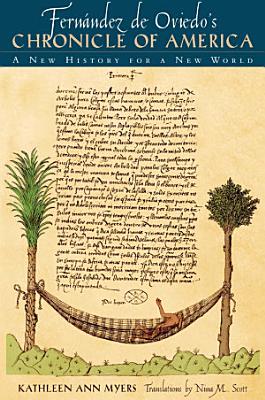 Gonzalo Fernández de Oviedo (1478-1557) wrote the first comprehensive history of Spanish America, the Historia general y natural de las Indias, a sprawling, constantly revised work in which Oviedo attempted nothing less than a complete account of the Spanish discovery, conquest, and colonization of the Americas from 1492 to 1547, along with descriptions of the land's flora, fauna, and indigenous peoples. His Historia, which grew to an astounding fifty volumes, includes numerous interviews with the Spanish and indigenous leaders who were literally making history, the first extensive field drawings of America rendered by a European, reports of exotic creatures, ethnographic descriptions of indigenous groups, and detailed reports about the conquest and colonization process. Fernández de Oviedo's Chronicle of America explores how, in writing his Historia, Oviedo created a new historiographical model that reflected the vastness of the Americas and Spain's enterprise there. Kathleen Myers uses a series of case studies—focusing on Oviedo's self-portraits, drawings of American phenomena, approaches to myth, process of revision, and depictions of Native Americans—to analyze Oviedo's narrative and rhetorical strategies and show how they relate to the politics, history, and discursive practices of his time. Accompanying the case studies are all of Oviedo's extant field drawings and a wide selection of his text in English translation. The first study to examine the entire Historia and its evolving rhetorical and historical context, this book confirms Oviedo's assertion that "the New World required a different kind of history" as it helps modern readers understand how the discovery of the Americas became a catalyst for European historiographical change.

Magical Realism and the History of the Emotions in Latin America

Authors: Jerónimo Arellano
Categories: Literary Criticism
Magical Realism and the History of the Emotions in Latin America rethinks the rise and fall of magical realism in Latin America in the light of the cultural his

African Diaspora in the Cultures of Latin America, the Caribbean, and the United States

Authors: Persephone Braham
Categories: Social Science
Scholars of the African Americas are sometimes segregated from one another by region or period, by language, or by discipline. Bringing together essays on fashi

Race and Ethnicity in America: From Pre-contact to the Present [4 volumes]

Authors: Russell M. Lawson
Categories: History
Divided into four volumes, Race and Ethnicity in America provides a complete overview of the history of racial and ethnic relations in America, from pre-contact

The Globe on Paper

Authors: Giuseppe Marcocci
Categories: History
How did writing histories of the world change after the discovery of America? Focusing on a set of case studies, this book explores creative works by Renaissanc

Authors: Jaime Marroquin Arredondo
Categories: History
Translating Nature recasts the era of early modern science as an age not of discovery but of translation. As Iberian and Protestant empires expanded across the

The Alchemy of Conquest

Authors: Ralph Bauer
Categories: Literary Criticism
The Age of the Discovery of the Americas was concurrent with the Age of Discovery in science. In The Alchemy of Conquest, Ralph Bauer explores the historical re

Authors: Rolena Adorno
Categories: History
An account of the literature of the Spanish-speaking Americas from the time of Columbus to Latin American Independence, this book examines the origins of coloni

Authors: Lawrence A. Clayton
Categories: Biography & Autobiography
The Dominican priest Bartolomé de las Casas (1485-1566) was a prominent chronicler of the early Spanish conquest of the Americas, a noted protector of the Amer