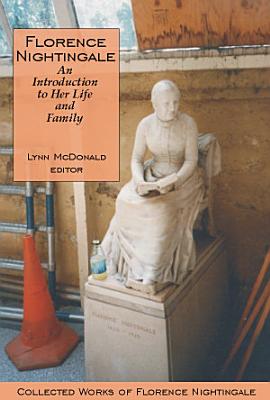 Florence Nightingale: An Introduction to Her Life and Family introduces the Collected Works by giving an overview of Nightingale’s life and the faith that guided it and by outlining the main social reform concerns on which she worked from her “call to service’’ at age sixteen to old age. This volume reports correspondence (selected from the thousands of surviving letters) with her mother, father and sister and a wide extended family. There is material on Nightingale’s “domestic arrangements,’’ from recipes, cat care and relations with servants to her contributions to charities, church and social reform causes. Much new and original material comes to light, and a remarkably different portrait of Nightingale, one with a more nuanced view of her family relationships, emerges. The Series In the Collected Works of Florence Nightingale all the surviving writing of Florence Nightingale will be published, much of it for the first time. Known as the heroine of the Crimean War and the major founder of the modern profession of nursing, Florence Nightingale (1820-1910) will be revealed also as a scholar, theorist and social reformer of enormous scope and importance. Original material has been obtained from over 150 archives and private collections worldwide. This abundance of material will be reflected in the series, revealing a significant amount of new material on her philosophy, theology and personal spiritual journey, as well as on her vision of a public health care system, her activism to achieve the difficult early steps of nursing for the sick poor in workhouse infirmaries and her views on health promotion and women’s control over midwifery. Nightingale’s more than forty years of work for public health in India, particularly in famine prevention and for broader social reform, will be reported in detail. The Collected Works of Florence Nightingale demonstrates Nightingale’s astute use of the political process and reports on her extensive correspondence with royalty, viceroys, cabinet ministers and international leaders, including such notables as Queen Victoria and W. E. Gladstone. Much new material on Nightingale’s family is reported, including some that will challenge her standard portrayal in the secondary literature. Sixteen printed volumes are scheduled and will record her enormous and largely unpublished correspondence, previously published books, articles and pamphlets, many of which have long been out of print. There will be full publication in electronic form, permitting readers to easily pursue their particular interests. Extensive databases, notably a chronology and a names index, will also be published in electronic form, again permitting convenient access to persons interested not only in Nightingale but in other figures of the time.

Florence Nightingale: An Introduction to Her Life and Family

Authors: Lynn McDonald
Categories: History
Florence Nightingale: An Introduction to Her Life and Family introduces the Collected Works by giving an overview of Nightingale’s life and the faith that gui

The Collected Works of Florence Nightingale

Authors: Lynn McDonald
Categories: Biography & Autobiography
Florence Nightingale is famous as the “lady with the lamp” in the Crimean War, 1854—56. There is a massive amount of literature on this work, but, as edit

Authors: Lynn McDonald
Categories: Biography & Autobiography
Florence Nightingale’s Suggestions for Thought has intrigued readers from feminist-philosopher J.S. Mill (who used it in his The Subjection of Women) to the l

Authors: Lynn McDonald
Categories: Biography & Autobiography
Florence Nightingale is famous as the “lady with the lamp” in the Crimean War, 1854—56. There is a massive amount of literature on this work, but, as edit

Authors: Gérard Vallée
Categories: Religion
Mysticism and Eastern Religions, the fourth volume in the Collected Works and the third on Nightingale’s religion, begins with the publication for the first t